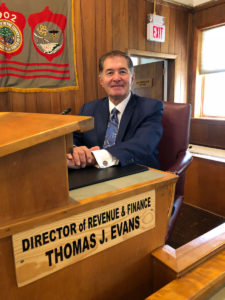 Tom has served on the Board of Commissioners as your Director of Revenue and Finance for over 16 years. A life-long Nutley resident, he graduated from Nutley High School in 1973. Tom earned his Bachelor’s degree with honors in Accounting from Fairleigh Dickenson University in 1977 subsequently becoming a Certified Public Accountant in 1982.

Now a full-time Commissioner, Tom recently retired a Partner and Chief Learning Officer (CLO) at PricewaterhouseCoopers LLP (PwC). Tom led a large, diverse team of over 500 staff with a budget in excess of $250M annually. With over 40 years of public accounting, adult education and corporate leadership experience, Tom brings this exceptional background to his role in Revenue and Finance for Nutley. In all things, he remains guided by his core values – Integrity, Teamwork, Mutual Respect, and Personal Accountability.

Tom is a member of the American Institute of Certified Public Accountants (AICPA), the New Jersey State Society of CPA’s and the American Society for Training and Development. As a nationally recognized leader in innovation and talent development, CLO Magazine named Tom “CLO of the Year” in 2014.

A proud member of Nutley UNICO, Tom previously served on the Board of Trustees for the Nutley Free Public Library and the Duke University Fuqua School of Business Center for Leadership and Ethics. In 2017, Tom was deeply honored to be inducted into the Nutley Hall of Fame.

Tom remains dedicated to the welfare of Nutley, the town that he and his family will always carry in their hearts. When he is not acting in his professional roles, Tom spends time with his growing family, especially his grandson. Tom’s daughter, Mary Kate, is the General Counsel for University Hospital in Newark, and is married to Jared, who serves as the Director of New Jersey’s Office of Homeland Security and Preparedness. His son, Tommy, is a Director with PricewaterhouseCoopers and is married to Christina, an English teacher at Livingston High School. His son, Andrew, works as a Recruiter for Robert Half. Andrew’s wife Claire is a project manager with Novartis Pharmaceutical. Andrew and Claire are now the third generation of the Evans family to live in Nutley.